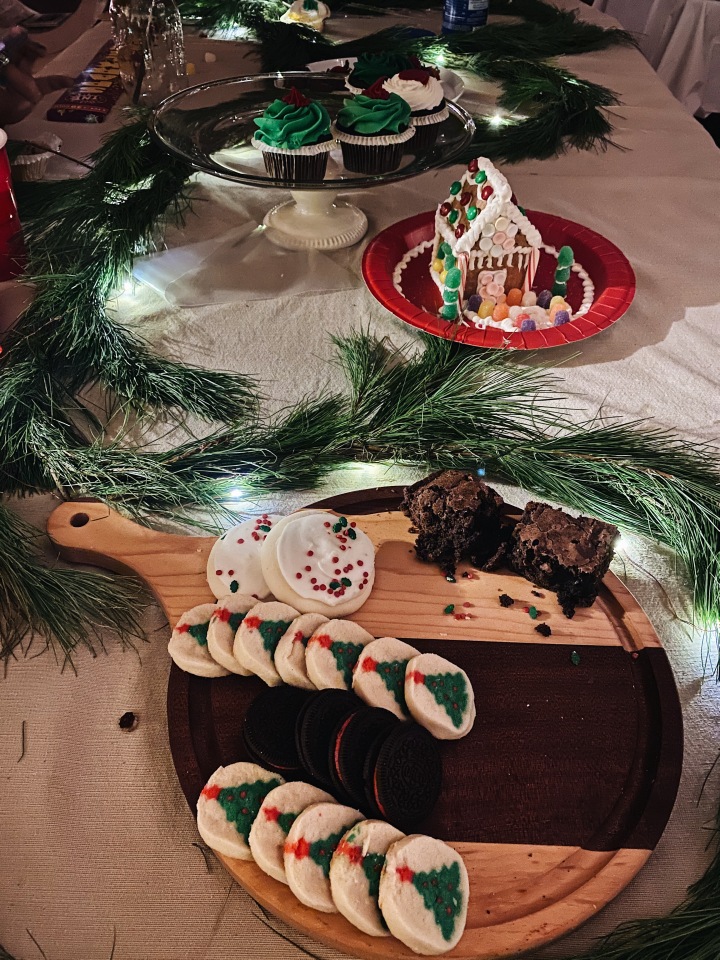 This past weekend, I (Arianna) had a little girls get together with some of my friends and my sisters at my house. The theme was originally going to be black and white, but I couldn’t find enough ornaments for the tree/ ones that I liked so I had to change the whole theme up. I then switched it to black, white, and red. The main christmas tree included all three colors so it would blend in with the party. My disclaimer: the photos below aren’t up to par with what I would personally like, but I was enjoying time with friends, being a hostess, and living in the moment, so enjoy the little bit of photos that I ended up taking.

For decor, it was mainly lights everywhere around the main areas. The table had a little evergreen garland with intertwined twinkle lights on it. For plates, we had large ones that were red that said, Merry & Bright and dessert plates that were white, which said Ho Ho Ho on it.

As everyone started arriving, we had Christmas socks on a platter dish for people to choose from. After about an hour later from when the party started, everyone had finally arrived and it was time to eat. I mainly stayed in the kitchen trying to rotate all the food since I decided not to do a gift exchange this year, but instead have everyone bring appetizers. Honestly wish I had a photo with all the food on it because it was a lot. After we ate, it was time to play Christmas trivia. It was my friends vs my sisters. My team ended up losing by two points. Basically, the young ones won.

After trivia, it was time for the gingerbread contest. Everyone was in groups of two’s for it and we used graham crackers instead of gingerbread houses. So my partner and I’s one, it was all going great, and then a tornado hit it and it fell… haha. So then we tried to set it back up, decorate it, and again another tornado hit it. Unfortunately, our house was the only one that couldn’t stay alive.

When decorating, I noticed one of my sisters friend decided to move the elf on the shelf.

For dessert, we did cupcakes, brownies, chocolate covered strawberries, and a little cookie spread.

After we chatted for awhile and talked about life, we went outside to do sparklers.

As you can tell by Jakelin’s covered up hands, it was freezing outside.

For the rest of the night was all just hung out. I realized that I put too much pressure on making things perfect, that it will literally stress me out for the whole day. Being someone that loves entertaining, but is also a perfectionist isn’t really the best mix. There were certain things throughout the party that I wish were different, but at the end of the day, it’s out of your control and you just have to roll with it.

Happy Hanukkah and Merry Christmas Eve Eve to everyone!